Three Benefits to Working Past 70

Besides for the benefits of still earning money instead of tapping into retirement funds, there are three additional benefits to working past 70 that many people don’t realize:

1 – The social security administration re-calculates your benefits every year based on your 35 highest-earning years.  For example, if you’re age 70 and you currently have a job that pays near your highest level, you can boost your social security income by replacing your lower earning years with your current higher-earning years.  While this little-known fact won’t help you if your income is closer to your lower earning years, it may be useful if you work in a higher-income profession such as law, medicine, accounting, etc.

2 – If you wait until age 70 to start taking social security benefits, you may be able to increase your benefit by up to 8% per year that you defer your benefits.  This could have a significant impact on the amount of social security income that you’re able to enjoy during retirement.

3 – Experts on aging have noted that working longer can have health benefits for people who enjoy their jobs.  After all, today’s retirees tend to be a lot healthier and more active than their parents were at similar ages.
Bottom line: don’t short-change yourself without evaluating all your options!

Many pre-retirees don’t fully understand how social security benefits work according to a recently released study conducted by AARP and the Financial Planning Association.  Click here to view the full study.  Here are three important facts from the study that I found to be very useful:

1 – You can start taking benefits at age 62
The earliest age you can start taking social security benefits is age 62.  However, the longer you wait, the more benefits you can collect.  For example, you may be able to collect 25% - 30% MORE benefits if you wait until full retirement age, which is currently between age 66 and 67, depending on when you were born.

2 – You can defer your benefits up to age 70
Waiting until age 70 to start claiming benefits can boost your benefit by up to 8% per year that you wait.  This is known as the “Delayed Retirement Credit”.  Click here to view a helpful chart on the Social Security Website.

3 – Spousal Benefits May Apply
A divorced individual can collect social security benefits based on the ex-spouse’s work history if the couple was married for at least 10 years.
Bottom line: make sure to evaluate your social security options with a financial planner before making any decisions that may impact your retirement plans!

Email ThisBlogThis!Share to TwitterShare to FacebookShare to Pinterest
See links above for Product and Business Development solutions
No comments:

Is Student Debt Standing in the Way of Homeownership?

Student loan balances have doubled since 2007 to well over $1 trillion. Meanwhile, millennials are taking much longer than previous generations to buy their first home.  A recent study examined whether student loan debt is preventing young adults from purchasing homes*.

Surprisingly, the study concluded that there is no causal relationship between student debt and delayed home-ownership.  In fact, debtors in their late 20s were more likely to own a home than non-debtors.  The study gives several alternative explanations for why millennials are delaying their first home purchase when compared to prior generations.  Mainly, the delay in home-ownership seems to be part of a larger trend of delaying the period of life known as “transition to adulthood”.  For example, the share of 18-34 year-olds who are married with children has also fallen from 27% in 2000 to 20% in 2015.

Moral of the story?  If you’re going to take out student loans, it’s better to graduate from college with a degree that leads to a high-paying job.

How Much Student Debt is Too Much?

Student loans have surpassed credit card debt and are now the second largest source of household debt in the United States… second only to mortgage debt.  Is this leading to a decline in household wealth?  Several recent studies have examined the topic and it seems that the amount of debt is not as important as the college degree that came with it.

For example, young adults who graduate with degrees in business, law, and medicine tend to have very high debt burdens.  However, their degrees tend to lead to jobs with very high incomes.

On the other hand, young adults who have either dropped out of college or who have graduated with degrees in lower-paying fields end up with lower paying jobs.  This would cause even a small amount of student loans to be burdensome.

A recent study conducted by Georgetown University found that top paying college majors earn a staggering $3.4 million more than the lowest paying majors over the course of a recipient’s career.

Moral of the story?  Examine the earnings potential of the degree you want before you get into debt to acquire it.
Source: CMPS Institute
No comments:

What's a College Degree Worth?

Among the winners are college degrees in STEM (science, technology, engineering, and mathematics), health, and business.

These degrees have average annual wages of $37,000 or more at the entry level and an average of $65,000 or more annually over the course of a recipient’s career. Click here to view the full report.

Contact me if you have any questions or if you'd like to schedule a mortgage planning conversation.
Source: CMPS Institute
No comments:

Three Things You Can Do to Better Prepare for College Expenses

In the last 10 years, students themselves have gone from paying 30% of college costs, to paying close to 50% of their own college costs.  This has resulted in driving up the outstanding student loans in the US from $350 billion to a staggering $1.2 trillion over the past 10 years.

The interesting thing is that high-paying jobs are certainly no guarantee after college, and 11.1% of all student loans were more than 90 days delinquent in the first quarter of 2015.

Here are three things you can do right now to help your children or grandchildren prepare for the first major investment of their lives:
Source: CMPS Institute
No comments:

Complete Questionnaire-I'll Be In Touch 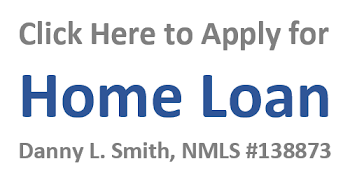 Since 1984, Danny's goal has been to make a difference in the community that he serves through home ownership and helping people build themselves out in front of their businesses.

A Certified Mortgage Planning Specialist and a Certified John Maxwell Team coach, Danny has in intensity for helping people. His first priority is honesty, integrity, and a solid commitment to quality. He will never sacrifice quality for profit. Danny's reputation and trust with his business partners leverages his use of data to methodically create solutions that best aid the client.

Click here to find out more about Danny: LinkedIn Profile